As the 2017 MIAA playoffs approach Week 2, and with the NEPSAC Bowls rapidly approaching, the top gridiron stars in Massachusetts and throughout New England are making their impacts felt in critical game play.

Many of these athletes have made huge strides in their football development and have shined on the gridiron this fall, in part due to the focused effort and continued success of their offseason work on the field and in the weight room. Along with enhanced recruiting opportunities, the continued offseason focus has now struck Northeast football, much the way AAU basketball and Club Lacrosse has done in their respective sports over the years. Nationally this is not a new phenomenon, as programs have been thriving throughout football hotbeds like California, Texas and Florida for years. The 7-on-7 football allegiance in these "football states" is something that programs such as Mass Elite have seen and seek to emulate.

"Our goal for this program is to continue to grow Massachusetts high school football and provide athletes with an opportunity to improve and compete against the best,"  Mass Elite program director, coach and current Middlesex school assistant Will Croom said.

This past offseason Team Mass Elite 7-v-7 and 1st String Performance expanded their successful platform and furthered the initiative of showcasing New England high school football talent, in the ever expanding and competitive offseason football competition.

In the Spring of 2017 the second annual Northeast 7-on-7 Spring Ball Showdown took place at Nashoba Tech High School in Westford, Massachusetts. Over that weekend several highly recruited athletes and top local talent came pouring in from all over the Northeast. National club teams and local teams faced off. The talent level was deep at the event and as we have seen by the start of the 2017 football seasons, the talent has translated and grown from their offseason work.

Team Mass Elite had the burden of defending their turf and they were certainly tested often by the outside competition. They finished the weekend with an (8-4) record and took home the 2017 Championship hardware.

They would battle back from the brink of elimination to rally on and claim this years tournament Championship. Their staunch defense was led by URI commit Duane Binns of Everett HS, UConn and Rutgers recruit Brendan McKeon of St. Thomas More School (CT)l and Khari Johnson of Catholic Memorial. The defense stepped up big time and stymied several offensive assaults.

On offense, towering figures like Joey Everett of St. George's school (RI), along with Nike opening and NJ top performer, Johnny Rosario of Bridgton (ME) and Navy commit Preston Parsons of  the Hun School (NJ) were unstoppable on the outside.

Yale commit Shane Frommer of King Phillip , UConn recruit Devaun Ford of Mashpee HS and Gabe Elias of Leominster HS were problems for defenses all weekend in the slot.

Brady Martin of Lawrence Academy pulled a Bo Jackson going from the tournament to lacrosse game and back. Martin was a field general and put it on display during the championship game against CT's Finest, showing why he is becoming such a hot name on the recruiting trail. New Hampshire product Parker McQuarrie of John Stark HS and Matthew Petercuskie of Barnstable HS also contributed some great throws and moved the chains, while introducing themselves as a force to be reckoned with.

"This year’s tournament was definitely exciting," Croom stated. "We attracted more teams and even more top talent then we did our first year, and set the bar even higher for future success.”

Team Xenith U-16 had some growing pains during the weekend but were fearless. This squad was comprised of mostly 8th graders with the exception of Duke commit Jake Bobo and Belmont Hill teammate speedster Sam Hill. Strong play came from Thomas Garland and brother Connor Garland of Xaverian Brothers, Evan Thompson of Newton North, Luke Bobo of Belmont Hill and Tristan Benson of Monson HS. Xenith U-16 finish their weekend at (2-7) record.

Team Mass Prep Stars battled all weekend, albeit finishing with a (2-6), but had some flashes of life from Lowell HS scat back Anthony Doung, who had several nifty runs. Shorn Hawthorne of Quincy HS was also impressive stretching the field and had several some drive saving catches.

CT 5-Star had a respectable showing with a (6-4) record. Losing in the quarter final to Team Mass Elite in a tight one. CT 5 Star was powered offensively by Penn State commit QB Will Levis of Xavier HS and UCONN and BC recruit Brandon Sebastian of Cheshire Academy.

Last years Spring Ball champions Next Level Bats - Rochester NY were missing a few athletes like Elite-11 regional finalist QB Braeden Zenelovoc of Wayne HS and Univ of Buffalo commit Corey Gross of Brockport HS, but this did not phase NLB one bit. Their aggressive defensive style of play from players like Justice Griffin of Eastridge HS, Shalamar Curry of Eastridge HS kept this squad in the hunt at (7-2). Stellar play from Rayshawn Bosswell of Monroe HS/ Berkshire School, Jadon Turner another Eastridge HS product and Tyquil Glasgow of Monroe HS.

New Comer CT's Finest came in and flexed their muscles on day two. Mowing through the competition en-route to a finals appearance. Finishing their weekend with a (7-4) record and just falling to Team Mass Elite in the Championship game, ST’s Finest had several athletic and acrobatic catches from Lawrence Academy’s Justin Barron and strong overall team play, which made CT's Finest a force to be reckoned with.

“Each year the program grows in popularity and creates more opportunities for those who want to be tested and take their game to the next level," Croom said. "We definitely had some top caliber private schools and small college programs in attendance with several film requests from FBS and FCS programs. The competition, opportunity and exposure for the athletes that came was without question amazing. It has been humbling to have partnerships with companies like Adidas, The Process, Gamebreaker, Mass Prep Stars and Northeast Gridiron Promotions. Along with the support of the athletes and coaches who've gotten behind me. This event included participation from athletes who are committed to or recruited by Duke University, Bryant University, URI, Yale, Boston College, South Florida Syracuse, UNC, Navy, UConn. UNH, UMASS, Rutgers, Temple, Univ or Buffalo, Penn State, and NC State.”

On the heels of the Northeast Showdown 7-on-7 tournament. 1st String Performance hosted the Dirty 30 linemen challenge. It did not disappoint. These athletes competed and tested out in front of coaches from FCS, D2, D3 and prep school programs.

DT/T Willem Froumy of Exeter HS. The Syracuse commit is a man child of a specimen. Strength was off the charts on the bench and led ball toss. He was equally impressive in the 1 on 1's . It's obvious to see why the Orangemen swooped in quickly to secure his commitment.

OL Ben Bohnenberger of Mashpee HS. Bohnenberger was in prime shape after his performance at New Jersey’s Nike opening event. The Colgate commit’s agility was impressive.

C/DT J ohn McNamara of Mashpee HS. Like his teammate Bohnenberger, McNamara was a surprise and an indicator of the talent level on the Cape. John's prototypical size and sneaky athletic ability coupled with his versatility will make him a prized FCS recruit.

DT Andrew Force of Cardinal Spellman. Andrew doesn't have the size you may look for at Defensive tackle. However his first step, high motor and low center of gravity was problematic for blockers and talents were on full display.

DT Jimmy Bello of Tilton Academy is a very powerful athlete with a compact build. There was just no answer for his raw strength and speed.

Center Zak Zinter of St. John's Prep Danvers is a tall and athletic prospect and possesses all the tools for recruiters to salivate over. This dual sport athlete has a tremendous future at the Prep both on the football field and track.

OL/DL Tim Lawton of Maynard HS was a pleasant surprise. The young Tiger is a towering figure and is poised to show his ability is big stage worthy.

DE Lucas Folan of Catholic Memorial HS. Folan has a great first step. Very finesse and technical. Has the athletic ability to convert to an Outside linebacker at the next level.

NT Chris Yeboah of Holy Name HS. Is the younger brother of UConn freshman Running back Kevin Mensah. Chris has very good speed and the bulk to add with it.

“For the first year, this event was a success,” Croom said. “We had some great coaches on staff, like Marvin Wright, a former defensive lineman at UNH. Former Syracuse Orangemen offensive tackle Emerson Kilgore was fantastic and Rivers Head Coach Tom Boudreau was spectacular. The group of athletes who attended performed well and did it in front of some programs. They were very appreciative of the opportunity. I am pleased to have been able to host an exclusive event for these talented linemen and I look forward to getting more players involved in the future." 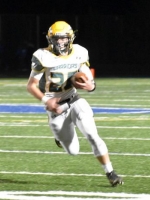 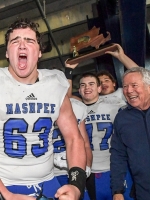