TEAM MASS ELITE 7V7 PROGRAM recently concluded their final tryout of the Spring 2016 season in Massachusetts. The day was highlighted with the athletes testing in various combine type drills, as well as offense versus defense competitions and mock scrimmages. Some influential guests such as the NFL Network's Albert Beer, U.S. Army All American Bowl-FBU representative Joe Bouffard and Co-partner Mark Flynn from "The Process" a national Football recruiting service, were all on hand to view the vast local high school talent.

This event showcased some top caliber Youth and High School talent from all over the State of Massachusetts. Athletes came from as far as Rhode Island, Connecticut, and Springfield, Mass. to attend teh second tryout of teh season. Central High School in Springfield, Mass. brought a bus load of talent, including Tank Walker, Brandyn Jones, Coreese Everett, Corey Cogell and Myles Bradley. All of these athletes really showed up big time for the Golden Eagles and their vast amount of talent should make them an improved and dangerous unit come 2016 . Giovanni Figueroa was in lockdown mode the entire scrimmage, battling and really causing fits for wide receivers. St. John's High School in Shrewsbury had some linebackers Liam Doran and Andrew Delbrocco show some range in coverage. Amadu Mohamed from Holy Name in Worchester made some good stops on defense and was in great position on a lot of plays. Noah Gray of Leominster High school who is a TEAM MASS ELITE veteran, ha made the switch from being the Blue Devils starting QB to Wide Receiver, which is proving to be a seamless and effortless transition. Gray made catch after catch using his physical stature to overpower defensive backs  and also using his feet and hips to get separation. The speedy Jukka Morals from North Andover showed off some top end speed and made a name for himself on the day with running a 4.56, one of the fasted 40's of the afternoon. Tony Reeves from Central High school in Providence, Rhode Island has great stop and go and route-running. He also made some outstanding catches in the mock scrimmages. 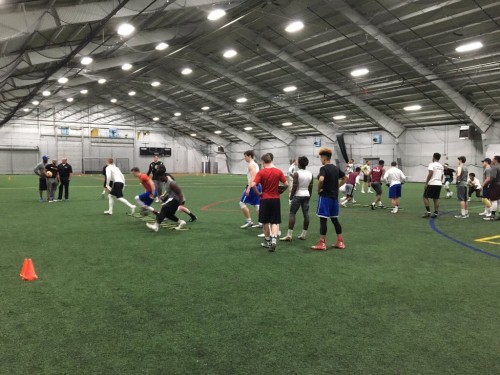 The Mass Elite is starting to grow legs after last year's highly impressive roster and successful first season of existence. The 2015 TEAM MASS ELITE squad won the 2015 NUC Air Raid Tournament and claimed number one seeds, with their display of dominant offensive power, in both the New Jersey and Washington DC Pylon tournaments. The program, founded by Sudbury Native and Westford resident Will Croom, has been instrumental in helping showcase talent from the Bay State. Last year’s team has seen student-athletes recently commit and sign the letter of intent earlier this month, to the following universities....

The program is now going to be crossing the borders, heading in to the Nutmeg state to start The Connecticut ELITE 7V7 program. "We're merely trying to provide an avenue for the athletes and work in conjunction with many area high school coaches," Croom stated. "We want to provide Connecticut student-athletes with an opportunity to get better in the offseason, as well as be exposed to the right people to help them capitalize on a chance of obtaining top-notch education through athletics."

(** Returning players to the program)

TEAM MASS ELITE will be opening up their travel team season in April Tournament dates listed below:

For information on the program please visit TEAMMASSELITE7V7.COM