EVERETT – If it seems like Jake Willcox '19 has more experience than your average first-year starting quarterback, it’s because he does.

Everett, the defending Division 1 state champions, have not missed a beat, offensively this season, with the junior signal caller taking over for graduated star Jordan McAfee (UConn).

Willcox has an impressive 51-of-69 passes completed, for 979 yards, to go with 11 touchdowns and just two interceptions through four decisive wins for the Tide. His latest masterpiece was a three touchdown, 278-yard performance in the first half of a 55-27 road win at Lowell last Friday.

The 6-foot-1, 180-pound gunslinger put Lowell away early with a 67-yard touchdown pass to Jason Maitre, who also announced Everett’s sustained dominance with a 70-yard touchdown to open a rout of Xaverian back in Week 1.

In a key Week 3 victory at St. John’s Prep, Willcox found fellow playmakers Mike Sainristil and Anthony Norcia for scores, as this Everett squad continues to make their mark on what they hope will be another state championship run.

For these four Everett natives, winning a state title last year was an unbelievable feeling, but leading their school to another title as the centerpieces of this offensive juggernaut would provide a sense of redemption.

With Willcox under center and Norcia, Maitre, and Sainristil flanked out wide as the stars of a 2014 Pop Warner squad, Everett advanced all the way to the state championship.

Willcox threw a touchdown to Norcia, on the final play of the game, but a holding call negated the touchdown, resulting in a heartbreaking one-point loss.

Yet the experience gained by playing in a sophisticated spread offense gave these players a leg up when it came time to compete for a roster spot at a storied high school program.

“When we came [to Everett High], we were ready,” recalled Sainristil. “Everything from route-running to playing in an up-tempo offense, we were used to it.”

As a sophomore, Sainristil lit the MIAA on fire last season, scoring 11 total touchdowns as a receiver, cornerback and kick returner to help the Tide roll to a state championship. Norcia compiled 31 catches for 735 yards and 11 receiving touchdowns and Maitre starred on both sides of the ball on his way to six more touchdowns.

Just as it helped the three receivers make an impact with McAfee at the helm in 2016, the familiarity between Willcox and his wide receivers helped him make a smooth transition in his first few starts.

“We have chemistry, we have a bond and we hang out every day,” Maitre said about the relationship between himself, his fellow receivers and Willcox.

“Even when McAfee was at quarterback, we’d come down and work out with Jake, so it wasn’t that big of a transition.”

With Willcox under center, Maitre has caught 4 balls for 146 yards and 2 touchdowns this year, adding a pair of rushing touchdowns as well. Norcia has caught 17 passes for 231 yards and came down with a spectacular one-handed grab in a win over St. John’s Prep, while Sainristil continues to function as an elite triple threat, compiling 259 yards from scrimmage and 5 total touchdowns through 4 games.

Needless to say, Everett has been head and shoulders above the competition thus far.

Of course in the “City of Champions,” winning during the regular season means very little, especially for a team that is expected to compete for a second consecutive state championship and has been so dominant that they were ranked ninth in USA Today’s East Regional Rankings at the beginning of October.

For a group of kids that grew up watching an Everett High program that won nine Super Bowls within a 15-year span from 1997-2011, this year represents an opportunity to create their own legacy.

“It’s been my dream since I was a kid to be a captain and now the role has changed quite a bit, because now we’re setting the tone,” Norcia said about being a junior captain. “We went to high school games every Friday night and couldn’t wait for it to be us. We saw Everett win so many Super Bowls and now it’s us.”

An even-tempered young man with a quiet confidence about him, Willcox never let his commitment waver while backing up McAfee over the course of two seasons.

He began playing quarterback at the age of seven. He has a bevvy of weapons at his disposal and after working out with his trio of receivers throughout the offseason, came into the season ready to perform.

“I had to wait my time and I’m happy it’s here. Of course I had butterflies before that first game but once we got out there though, I was ready. I’ve been preparing for this forever,” said Willcox.

With big-bodied receiver Isaiah Likely transferring from Malden High, Kevin Brown transferring from Brighton and Jacob Miller taking over for graduated running back Marvens Fedna as a workhorse out of the backfield, Willcox doesn’t lack for options offensively.

In fact, that dearth of weapons has turned Everett practices into competitions.

“Sometimes there’s arguing, and it’s a competitive spirit, but we feed off each other,” Maitre said about practicing with so many talented athletes. “But once the game starts, it’s all about helping the team succeed.”

Likely has already made a huge impact with 230 receiving yards and 3 scores for Everett, as the Tide averages 42 points per game, but the engine that makes the gold and white juggernaut go is Willcox.

“[Willcox] is the most competitive player on the field at all times,” Maitre effused. “We knew coming into the season that we had a great quarterback. Other teams might not have known, but they’re finding out.” 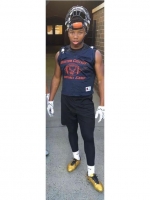