NEWTON, Mass – Science is beginning to play a larger and larger role within sports, from the highest professional level to the development of young athletes.

The senior lefthander is 13-3 with a 0.66 ERA and 136 strikeouts with just 17 walks, while starting all but four of Newton North’s games this year. Schaefer is also hitting .424 with a home run and 18 RBIs, as the Tigers (17-3) enter the Division 1 North bracket of the state tournament as the third seed.

Newton North is seeking their first sectional title in program history after losing in the D1 North finals in each of the last two seasons. With Schaefer ready to pitch nearly every other day, they have a great chance to get over the hump.

While she’s close to the top of the statewide leaderboard in almost every category this season, Schaefer more or less came out of nowhere.

She sat behind the Tigers dynamic duo of Liv Sloane and Gabby Vachon at the beginning of her career, but kept her nose to the grindstone and prepared for her moment.

Schaefer began pitching at the age of eight, before becoming serious around 13 when she started training at Planet Fastpitch in Uxbridge, Mass. It was there that she first began to refine her technique and apply scientific principles to her approach on the mound.

“It’s an incredible place that develops softball skills along with become a well-rounded female athlete,” Schaefer said of the Central Mass. facility. “I started to learn a lot of little things that helped me use every part of my body to max out and I just wanted to prove to my coach that I was worth a chance.”

So when 19-year head coach Lauren Baugher called Schaefer out of the bullpen in a tournament game last spring, the junior was ready. She spun several shutout innings to allow the Tigers to come back for a narrow 7-6 win over second-seeded Concord-Carlisle in the North semifinals, earning the trust of her coach in the process.

“[Schaefer] waited for her opportunity and obviously is making the most of it,” Baugher said. “It’s a testament to her as a person and an athlete. She wants the ball when the game is on the line and she knows she puts us in the best position to win.”

For Schaefer, paying her dues behind two of the better pitchers in the region only added fuel to her fire.

“If I was just around people the same level as me I would’ve become complacent, but they really drove me to work harder, improve and try to outperform them,” Schaefer said. “I’ve had to work my butt off and it was a struggle to be honest because I felt like I deserved to have a chance. But I waited my turn and this season I’m proving what I’m made of.”

Early in the season on April 12, Schaefer turned heads by striking out 10 batters in a narrow 3-2 win over Framingham. The next day, she hit a two-run home run as part of the Tigers 14-0 rout of Milton and one week later, she twirled a complete-game, three-hit shut out with 8 strikeouts to lead North in a 1-0 victory over King Philip.

That burst of success may have surprised some observers, but Schaefer’s self-confidence coming into the season was quite high after she performed well for the East Coast Force at the USSSA Dudley College Showcase in Connecticut over the summer.

It was just one of several tournaments on the 18U circuit for Schaefer and one of her most impressive outings.

“Summer tournaments are a whole different ball game,” Schaefer asserted. “I have so much fun and a lot of the girls are getting recruited, so after that I feel very prepared in pressure situations because of performing under pressure in those situations.”

One of her longtime teammates and current Co-captain Elizabeth D’Agostino, played with Schaefer over the summer and shared some of the confidence that the young pitcher developed.

“[Schaefer] is blowing everyone away this year and she’s improved so much. We’re just so proud to be behind her,” said D’Agostino, who is hitting .444 with 16 RBIs as the Tigers starting shortstop.

“We know we can rely on her and she’s so solid and she has our back every time she takes the mound and she’s also become such a great leader on and off the field.”

And while the tangible results on the field are exciting to Schaefer, she becomes positively giddy whenever a conversation turns towards Sport Science.

The senior eagerly explained how she volunteered for a study at Mass General Hospital recently and learned about the impact of throwing underhand by simulating her motion with electrodes attached.

“That was so cool to me,” Schaefer recalled. “I’m really into executing as efficiently as possible to get the most movement and speed. I find that type of kinesiology really fascinating.”

By using what she learned in that study, the knowledge acquired from AP Physics and Calculus courses at North, and her countless hours of year-round training, she has been able to showcase as much longevity as any pitcher in program history.

“I feel amazing,” Schaefer said after hurling 96 innings this season. “I don’t have problems with my arm and I think it’s because I’ve learned the right techniques and mechanics. Part of it is what I learned at MGH and also my training to find the right arm angle.”

She’s topping out at around 65 miles per hour and routinely fooling hitters with a “drop curve” that looks even more deceptive when coming off her left hand. Indeed, Schaefer will be an asset at Emory University next year and she’ll also be very eager to continue her education while determining her profession of choice.

But first, the Tigers Co-captain would love to lead her squad to new heights this postseason.

“She’s very selfless and that’s not something you can say about a lot of kids in this day and age,” Baugher added on her ace. “One thing I love about this team is that they really play for the seniors and for one another. We’ve had a target on our back for a lot of the season, but these kids are used to that pressure coming from such an achieving school, so I think we just have to keep doing what we do best.” 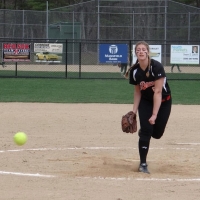