Matheis - credit - as Submitted to Under Armour Lacrosse

Case Matheis ’12, Attack, Darien (CT) - Matheis scored 69 goals and dished out 53 assists this season for Darien (20-2) on the way to another Class M state championship. The highly regarded Duke bound attackman was named All-American for the second time and also league’s Player of the Year.  During the 2012 season Matheis broke Darien's all-time career points mark and also holds several other school scoring records.

NEPS Prep and Private School Players of the Year

Sam Tweed ’ 12 , Middlesex School (MA) – It is hard to say if there is a more valuable player in New England than Tweed. The University of Vermont bound defender was one of the top close defenders in all of New England and he also was one of the ISL’s top face-off men with his long pole.  Tweed’s versatility helped lead Middlesex (14-1) to a share of the ISL title, along with St. Sebastian’s School and Governor’s Academy in 2012. NEPS Top of their Class

Top Senior – Bob Fahey ’12, Defense, Bishop Guertin (NH) – The two-time All-American defender has been one of the top defenders in New England for two years. Fahey helped BG win their third consecutive state championship and will take his talents to UMass next season where he will accompany fellow All-American defensive classmate Kyle Karaska in the Minutemen’s incoming class.

Top Junior – Nico Panepinto ’13, Needham (MA) - The Fairfield commit played one of his best games against the best competition in Duxbury in the MIAA D1 state championship game final at Harvard Stadium. Panepinto exploded against one of the State’s best defenses and displayed the speed, explosiveness and skills that will make him an early favorite for Player of the Year in 2013. The All-American scored 54 goals to go along with 40 assists this season.

Top Sophomore – Jay Drapeau ‘14, Attack, Westford Academy (MA) – The sophomore attackman was one of the top goal scorers of the 2012 season. Drapeau had a fantastic breakout season last year as a freshman, starting at attack from day one.  Drapeau is one of the top finishers and scorers in New England as the sophomore sniper improved upon his lofty freshman year numbers scoring 95 goals and dishing out 27 assists in 2012.

Top Freshman – Will Blumenberg ‘15, Attack/ Midfield, Concord-Carlisle (MA) – Blumenberg exploded on the scene in MIAA high school athletics this year as he helped lead Concord-Carlisle to an undefeated Super Bowl Championship in football and an undefeated (22-0) MIAA D2 state championship in lacrosse. Blumenberg led the Patriots in scoring with 71 points and also was a versatile face-off man and midfielder in the tournament run. 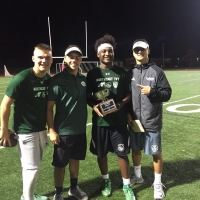